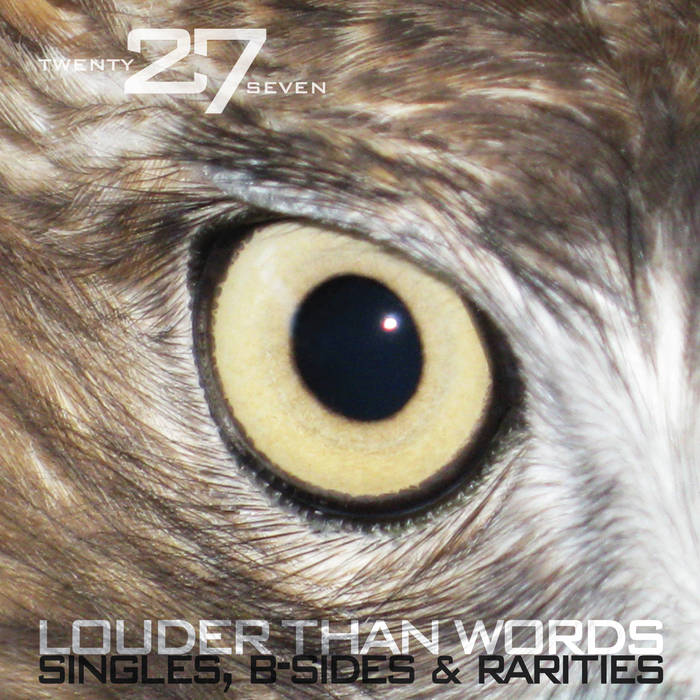 An eclectic collection of hard to find and previously unreleased material from the band 27, including the first song ever recorded by the band.

A note from Maria on the cover art: "The album cover art features a close-up of a hawk we rescued when we found him stunned in the middle of a highway, in the middle of America. At the end of a U.S. tour we were on a very long drive across the country, returning to Boston from Tempe, Arizona. Somewhere along the way, we found ourselves quickly approaching a large animal just standing in the passing lane. As we got closer we saw that it was a hawk and he wasn't going to fly away. We realized this creature wouldn't have a chance if we just drove around him, so we had to do something. We stopped the van in the passing lane and Ayal jumped out and picked up the giant bird and put him in the back seat of the van. Not sure which is more frightening, stopping in the middle of a busy highway to pick up the hawk, or physically picking up the hawk. After a few miles we covered him with a hoody. So there he was, this giant, powerful bird riding along in the back seat of the van. What to do next?

At the nearest exit, we put the hawk in a large empty merch box, leaving some holes for air. He was still stunned, but starting to wake a bit. We saw a sign for a nearby park ranger's office or something like that, but when we got there we found that it was closed since it was a Sunday. That was just as well though because the only other people pulling up to the place were men with guns, decked out in orange....hunters looking for their license to kill. We got out of there as quickly as we could. Finally, we thought to enter the word "animal" into our GPS to see if anything such as a nearby vet clinic would come up. A few things did, but of course since it was Sunday nearly everything was closed. Finally, after a number of calls, we found a wildlife rehabilitator 100 miles out of the way who would accept this very large injured bird.

It was a stressful detour north through rural Arkansas to get to the hawk some help. When we finally arrived, not only were we completely relieved, but we were immediately and utterly impressed by how the rehabilitator Andrea White (of Tender Heart Wildlife Rehabilitation) handled the bird. With her special talon proof gloves, she skillfully took the hawk out of the box and placed him in a cage, noting that he might have a concussion in addition to his obviously injured foot. Ayal took a couple of photos then, one of which is the cover image. But we had no idea what we were to see next: Andrea invited us to check out the rest of her rescues, so we proceeded to her back yard where we met some recovering three legged deer (who had been left by hunters), a litter of orphaned baby opossums, a pen full of chickens who had fallen off a truck, several abandoned ferrets, a number of injured gray & flying squirrels, some absurdly cute but ill gerbils, and many more various injured and recovering animals. Throughout our tour we were accompanied by her two dogs and their companion four legged deer, who acted as if she were just one of the dogs (she had been domesticated by some people who thought it would be fun to have a deer as a pet, until of course she became a full size deer and Andrea had to rescue her). It really is something else to have a deer lick your hand. We were able to get some beautiful photos of these precious and lucky animals. It was inspiring and incredibly heartwarming to chance upon the amazing hard work and selfless dedication of Andrea and her daughters. Truly a wonder of life and love.

We felt so grateful and humbled to have found these passionate and caring people. It was an amazing tour the band had just completed, but this incident instantly became the tour highlight. When we got home we checked in with Andrea from time to time to get updates on the hawk's progress and were relieved to learn that he was recovering. After a couple of weeks of recuperation and observation, Andrea saw that he was ready to go home. She drove the bird the 100 miles back to the area where we found him, and released him. She said it was a wonderful experience to see the magnificent and powerful bird fly away, healthy again, happy and free. Needless to say we were beyond happy.

We still keep in touch with Andrea...for what it's worth she could use donations to keep up with large feed and vet bills. Anyone interested in helping her out can send donations to Tender Heart Wildlife Rehab, 213 Bunch Springs Road, Berryville, AR 72616. Check out their facebook page here: www.facebook.com/tender.heart.54 Tender Hearts is a 501(c)(3) operation and donations are tax deductable. We feel so lucky to have found Tender Heart, places like this give us hope."

27 is Ayal Naor, sisters Terri Christopher and Maria Christopher, with Adam McGrath. Flip through any of their stacks of vinyl and you’ll find everything from Italian love songs, to art rock, to noise pop, to hip hop, to easy listening, to savage Viking metal. Not afraid to marry the force of heavy guitars with loops and hooky vocals, 27 has melded their wide influences into a style of their own. ... more

Bandcamp Daily  your guide to the world of Bandcamp

Featuring appearances from Kari Faux, Bluestaeb and and interview with NY-bred artist Wiki